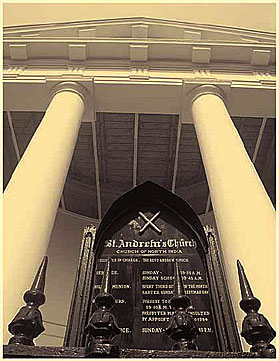 Based on that published in the souvenir on the occasion of St Andrew’s 150th anniversary in 1965 plus material from a pamphlet published by INTACH and other sources.

The Calcutta of 1815 was the seat of authority of The Honourable The East India Company and the most important of its settlements. The Governor General of India at this time was the Earl of Moira (afterwards the Marquis of' Hastings), and the Scottish community in Calcutta, including the military, was an important segment of the European population.

In the early days The East India Company had no set ecclesiastical establishment but apparently each ship carried a chaplain and latterly some ministers were brought out to the various settlements who were of the Episcopal Church of England. As the number of Presbyterians grew, the demand for their own ministers became more clamant. The Company were under no obligation to appoint chaplains but they were God fearing men and one cannot read the old records without seeing how great a value they placed on the observance of religious duty both amongst themselves and amongst those they employed. The earliest record of an appoint­ment of a chaplain is in 1607 and the number of churches gradually grew with the growth of the establishment. For years, men like Claudius Buchanan in India and William Wilberforce in England had been protesting against the Company's restrictive attitude towards Christian missionary work, and in 1813 Parliament insisted that the Company grant facilities for missionaries to work freely in India. 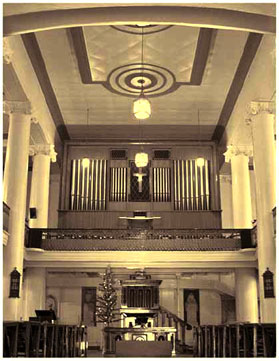 The Anglo-Indian Presbytery was created by the Charter of 1813 along with the Anglo India Episcopate. Its early days in Calcutta were full of unpleasant controversies between the Government and the redoubtable minister who came to give effect to the wishes of the Home Authorities. The Honourable, The Court of Directors in a public general letter dated 12th November 1813 informed the Governor General of the Presidency of Fort William in Bengal as follows :

"In order to shew our desire to encourage by every prudent means in our power, the extension of the principles of the Christian Religion in India, we have unanimously Resolved that an addition be made to the present Clerical Establishment maintained by the Company at each of our Presidencies of Bengal, Madras and Bombay, of one Minister of the Church of Scotland with the same Salary as is granted to the Junior Chaplain at each of the Presidencies, and we direct that a suitable place of Worship be provided or erected at each of our principal Settlements of Bengal, Madras, and Bombay for those Ministers of the Church of Scotland whom we may permit to proceed to India to act as Chaplains at either of those places."

A further letter dated 4th November 1814 intimated the appointment of The Rev. Dr. James Bryce as a Chaplain on the Bengal Ecclesiastical Establishment, and he duly reported his arrival in Calcutta on 28th November 1814 with a request for instructions to enable him to enter upon his duties as Clergyman of the Church of Scotland at the Presidency.

It is interesting to note that the appointment of Dr. Bryce was recommended to the Court by the fact of his having gained the prize, offered by Dr Claudius Buchanan  to members of the University of Aberdeen, for an essay on the best means of evangelizing India. 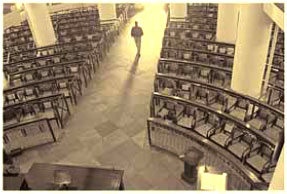 The Scottish Chaplain left England on the “Warren Hastings”, the same ship which brought out the First Bishop of the Indian Episcopate, Bishop Middleton.  It is apparent from some anecdotes which are on record of this voyage that ecumenical feelings were not so highly developed in those days.  The long dreary days on board were made pleasant with conversation and then unpleasant with debate.  The Bishop was convinced that the spire was the exclusive right of the Church of England.  Dr Bryce disagreed and replied that he would build a spire for the Kirk that would be high above the steeple of St John’s Cathedral and crown it with a weather-cock.  He did.  The Government, however, in deference to the feelings of the Bishop, instructed the Public Works Department not to repair  the unlucky bird.  It still remains, however, a familiar land mark and perhaps a symbol of the tenacity of the Scottish character.

After Dr Bryce’s arrival there appears to have been a period of delay on the part of the Government in allotting a site for a Church of Scotland.  It is even reported that Dr Bryce prepared a memorial (now known as a memo) addressed to the Court of Directors asking for home leave until such time as a suitable church had been built, but a site was finally allotted on the site of the old Court House east of Writer’s Buildings and the Company contributed Rs1,00,000 to the building fund.  The old Court House had been the scene of many spectacular trials, including that of Philip Francis in 1779 when he was a member of the Council.  The Rs50,000 damages which he was ordered to pay were reputed to have been used by the complainant to establish the manufacture of indigo in Bihar.  Prior to the erection of the old Court House there in the 1730s, this site was a piece of waste jungle land on the fringe of a dense forest. 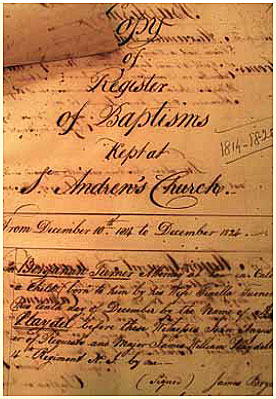 The foundation stone of the church was laid, in the presence of a large and distinguished company, with full Masonic honours, by The Honourable Archibald Seton, a member of the Council of India and Acting Provincial Grand Master, at the north-east corner of the Church on St Andrew’s day 30th November 1815.  The ceremony was attended in state by the Countess of Loudon and Moira, wife of the Governor General, and in the presence of Naval, Military and Civil dignitaries.

The builders were Messrs Burn, Currie and Co (who might be related to today’s Martin Burn & Co) and completed early in 1818 to be dedicated on Sunday 18th March 1818.  That day the Minister took as his text: 1 Corinthians 1. 21 “For after that in the wisdom of God the world by wisdom knew not God, it pleased God by the foolishness of preaching to save them that believed” a text which, for its sardonic humility, might have been written by a Scot.

The indefatigable Dr Bryce intended to build the church on a proper basis from the beginning and is recorded as having had a dispute with the Customs authorities on the Customs duty for the marble flooring.  He was apparently finally allowed to import this duty free but we unfortunately are not told how. What resulted was a main plinth about seven feet above ground level, in Grecian style with a Christian spire or steeple.  Both North and South porches are supported by massive Doric columns and are floored in white marble.

In 1843, a serious schism divided the Church of Scotland, which had consequences even in India. The Presbyterians split into two groups and a new Free Church of Scotland was born. In Calcutta the new ‘Free’ church built its place of worship on Wellesley Street. 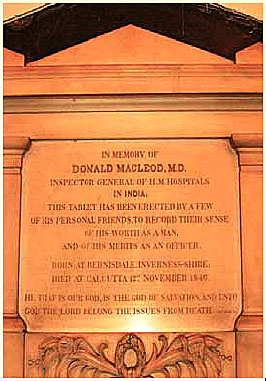 From 1942 on the two religious congregations joined together in one, choosing St. Andrew's Church as their place of worship.  Over the years control of the Wellesley Street church was lost until a sustained effort and court case regained possession. Today it would no doubt be sold for development and it is a site of prime value but the Kirk Session took a broader view to support Christianity and since they could not run it as church in 1969 donated it to the Jesuits who today run a thriving church and institution as the Church of the Lord Jesus.

Even after the Scottish expatriates ceased to be in a majority St Andrew’s continued to be the choice for other expatriates from all over Europe and North America who wanted to worship in a Reformed church even if they were not Presbyterians.  In the meantime Indian Christians and Indians with Scottish connections were a significant part of the congregation.  Eventually with a weakening Scottish connection, a smaller congregation and the financial burden of supporting a Presbyter send out from Scotland, it was clear that other options needed to be explored. The Church of Scotland was encouraging and supportive in this endeavour.  Over many years other churches in North India had been exploring a union starting with the Presbyterian and Congregational churches forming the United Church of North India (UCNI) in 1924.  The extended negotiations involving the Baptists, Methodists, Anglicans and others plus the UCNI were starting to bear fruit and St Andrew’s saw the need to be involved but only wished to preserve its particular form of governance by life time Elders.  In good Christian spirit this was agreed and St Andrew’s joined the union as the Church of North India, inaugurated 1970.  The CNI need have no reservations on this decision as St Andrew’s has been a loyal and fully supportive member of the CNI.

Commencing in November 2014 St Andrew’s will celebrate the year of its bicentenary which overlaps that of the Diocese of Calcutta.